The first speaker at the European Commission closed his presentation with three points:

The goal of a unified Europe, explained the officer, is not up for debate. “How do we reach it effectively and efficiently” is, however, open for critical engagement. For instance, he posed three general areas for input: organization, structure, and behavior. Such can be discussed – at least in theory! – by outsiders. The precisely-focused College of Europe admitted four Americans last year, demonstrating the institutional intention described by Dr. Michele Chang, “to be open to non-Europeans as well.” Listening to the presentations on EU institutions over the past four days, I’ve noticed trends in the material we’ve been given and also been aware of the range of reactions and engagement among the group of Fulbrighters composing the target audience. I, for instance, am attuned to rhetoric and evidence of inclusion and consideration of alternative ways of thinking – clearly in relation to my own project but also concerning which of my peers’ questions garner the most active and engaged responses.
At least some of my colleagues are more inclined to question the overall vision of the European Union than I am. “I feel like I was just given the cup of koolaid,” said one of my peers after the Commission presentation, A “European Moment” in EU/US Relations? The hyperbole referred specifically to the claim that development aid simply must be given (despite the fact that most international aid projects fail – certainly historically). I realized that I had accepted the Commission speaker’s distinction between microsocial projects that absolutely have a tangible impact on the ground and macrosocial projects that continue (probably with some notable exceptions) to be bungled. As discussion unfolded, Nell argued that “globalization” is not a fixed destiny – or at least not in only way, along one unalterable path. “There is nothing inevitable about social processes,” she said, “unlike climate change.”
I eavesdropped as this conversation continued with Scott, Max, Chloe, and others. Scott has a knack for (what he himself labeled) indiscrete questions. For instance, is the neighborhood policy (ENP) simply a bone or back-up arrangement of the Common Foreign and Security Policy for those States who fail to become Members of the EU? [Note: the specific link for the CFSP yields a page without information.] Anyway, Scott described what seems to be a belief or attitude that Europe is post post-war – at least this seems pervasive among all the EU officials who have spoken to us. Maybe, I wondered to myself, maybe I am being too readily suckered by the utopian vision and all the disarming openness of these politically smooth presentations? One of the trends I mentioned noticing is how each of the presenters has cast themselves as sharing their personal view of the EU institutions, rather than delivering a canned public relations pitch.
While there may be Euro-skeptics serving as Members of the European Parliament or on the Council of Ministers, there are no skeptics on staff: Europhiles only need apply! No problem – the European Commission is the driver of the entire European Union effort, supplying a rather substantial proportion of the requisite nuts and bolts as well as significant social, legal, and economic engineering knowledge of design and implementation. These are jobs for believers. I am on board despite the counter-views of my colleagues who, it must be acknowledged, may not actually disagree with the vision but rather question its exclusivity. In fact, we may have common cause in this regard. When one fixes one’s gaze on a singular target, there is always the possibility of reifying the boundaries not only of discourse (what can and cannot be said), but also of perception (what can and cannot be sensed). In other words, the path to that fixed hard target can become so commonsensical that internal contradictions and out-of-the-mainstream opportunities may barely be noticed, if they impinge upon awareness at all.
My colleagues may perceive particular selections and deselections (what I think of as an extension of Kenneth Burke’s terministic screen) within their specific fields; I notice them in relation to conceptualizing the benefits and added value of simultaneous interpretation.
For instance, I asked about the use of lingua francas and/or simultaneous interpretation in negotiations with countries outside of the EU, under the European Neighborhood Project. “Let me answer the question this way,” the presenter said. “When we do our evaluation plans, we write twelve reports, ten in English and two, for Tunisia and Morroco, in French.” Hmmm. I wasn’t asking about the written languages, rather the processes of spoken interaction. “In negotiations and emails,” he continued, “these are the languages we use. With some countries it would be easier to speak Russian but they don’t want to.”
When I was talking with Scott later, he said people don’t want to be associated with the Soviet Union, confirming what a Member of the European Parliament told me last week about his own use of Russian. “We [from eastern Europe] all know it,” he explained, “but we don’t use it. Unless I start speaking it and then everyone will switch.”
At the College of Europe, when I asked if there are any courses/experiences training students how to use interpreters, I received a halting answer from one presenter and then a clarification from the other.

“Well uh, they are , uh so we don’t have courses specializing in that area but as I said students are all, they speak more than five languages they are, they are fluent, I think they can easily do that, I don’t, I’ve never been asked that question….” [emphasis added]

“I can add . . . I have a better idea what you’re asking. We don’t use interpretation services at the college. The courses are taught in English, some in French; students are expected to be fluent in both. We offer courses in European studies not in interpreting or translation.” 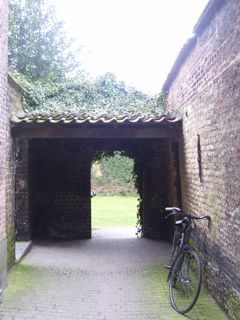 Two characteristics of the discourse about simultaneous interpretation in the EU are the conflation with written translation and the assumption of its narrow utility. The former confusion makes sense, as the challenge of making European law equally applicable in all countries despite differences of language and culture is formidable. Not to mention that the daily organization of work must be structured around the pace at which translations of documents for dossiers in progress can be prepared. Still, the frequency with which the matter of simultaneously interpreting spontaneous human communication is assumed to be either the same as, or less important than, the matter of producing written equivalents of legal code indicates a hierarchy that might also constitute an imbalance.
The latter characteristic of discourse about simultaneous interpretation – that it has a limited, utilitarian function – is the larger concern. There is an absolute taken-for-granted quality about most people’s conception of the use and value of simultaneous interpretation (SI): this is characteristic of the vast majority of conversations that I have with anybody about SI. Max helped me draw out one of the implications of this fact. He is working in Sofia, where there is a revival of traditional cultural forms – as is happening in many diverse communities, and is usually understood as a kind of backlash. Max described these group-level shifts as “a balancing dynamic” within large sociopolitical structures – which is exactly how I suggest SI operates socioculturally on the microsocial level.
Lauren shared some of her insights about simultaneous interpretation from a course she took on asylum hearings. Again – if I’m true to the ethnographic imperative – there was a bit of conflation between the processes of SI per se, and the written processes of recording (which is such a huge problem in all asylum proceedings it could be described as a lynchpin of injustice, in direct contradistinction to the ostensive motivation of fairness). Lauren jumped on the fact that interpretation is an on-going process every time we speak with anyone regardless of whether we’re using the same or a different language. Most people do understand that we are always interpreting each other, of course, but this kind of knowledge tends to exist so foundationally that it requires an effort to imagine why remembering matters.