Reunions with old friends and meeting new ones abound.

Last night, I had tears streaming down my cheeks during a good portion of Talk To Me, particularly through the civil rights movement portion of this film depicting Petey Greene‘s life as an entertainer. Not only does Don Cheadle bring Greene’s uncompromising assertiveness to life, Director Kasi Lemmons does a great job with the tension of differential ambitions between Greene and his Manager, Dewey Hughes (outstandingly acted by Chiwetel Ejiofor).
After a quick debrief, Natalia split the scene. Jose, Sinead and I were joined by John at Amherst Coffee. What a talk we had! Movie culture, memories of the sixties in the US, life in Malawi and Mozambique, and interpreting. Sinead had seen me working at the Graduate Commencement last spring – which included a protest against Andrew Card.
Prior to the movie, Jose and I ate while Jin (the Muscle-Bound-Tough-Guy) exercised his qi. 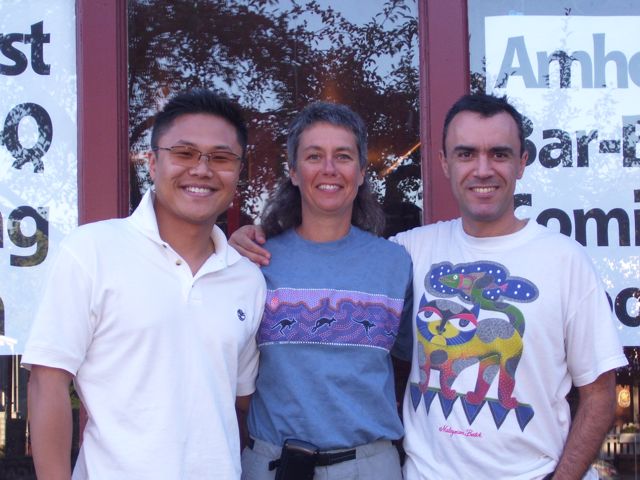 Our conversation covered Tae Kwon Do, Ta’i Chi, and the cultural politics of marriage.
I was reminded of my role as “community redneck,” because the previous evening a crew of Ever-Smiling Evil Indians regaled me with various responses to the typical American questions about arranged marriages. “He had two camels” is one answer to the decision-making process of the women/parents involved. We were eating at The Crazy Noodle, perhaps that inspired the round of sheer silliness? Next thing I knew there was a reprise of “we ride our elephants to school, they have their own parking lot,” compete at “camel polo,” and enjoy torturing valets with parking their mounts. You know they were getting to me because I became the “community ratkiller” in my notes (they give contracts to cats to kill the rats infesting every apartment) – perhaps a Freudian slip of my tendency to shine light into dark places? 😉 Is there really a sacred bull called Shambo? Maybe it was the Shiraz. Then Ambarish slipped, mentioning tunneling.

Quantum particles can penetrate into regions that are forbidden classically, leading to the phenomenon of tunneling.

We lost Ameya at this point – or did he lose us, kindof like the ball in soccer?! – and Supriya took off to find carryout containers. 🙂 by now, it’s been ages since the Ever-Smiling Evil Indian admired my tennis shoes: “they’re cool, with a hint of menace.”
hehehe

Ambarish added a cultural element while explaining arranged vs love marriages to a new friend a week or so ago, using me as his example: “We know there will be compromises. If I want to be friends with Steph, for instance, I know I’m going to have to make some compromises.”
Laughter all around. 🙂